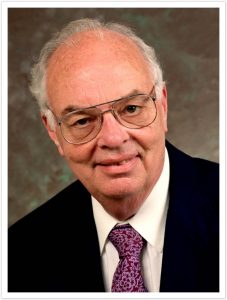 Leroy T. “Roy” Kerth, a remarkably talented experimental physicist, teacher and administrator who was deeply devoted to the University of California, died in his sleep Nov. 7, 2016, at age 87.

As a faculty senior scientist at Berkeley Lab, with teams he recruited and led, Kerth built major pieces of elementary-particle apparatus at the lab’s Bevatron, at Fermi National Accelerator Laboratory (working on muon-beam and proton-antiproton-collider experiments), and at SLAC National Accelerator Laboratory (working on the PEP-4 time-projection-chamber calorimeter and the PEP-II BaBar silicon-vertex-detector mechanical system).

As a devoted full-time teacher, Kerth brought the UC Berkeley Physics Department’s course-grade, teaching-assignment, and teaching-evaluation records into the personal-computing era, serving as vice chair for instruction. As a broadly gifted administrator, Kerth served as Associate Dean of UC Berkeley’s College of Letters & Science in the aftermath of the Free Speech Movement, and during 1983-88 he fully reorganized Berkeley Lab’s Computing Division as its new head. Later he served as associate laboratory director both for General Sciences (1988-91) and for Scientific and Technical Resources (1991-93). Kerth also advised Fermilab’s Director on its scientific program.

Kerth, who was born Nov. 23, 1928, and grew up on a small California farm, earned a bachelor’s degree in physics from UC Berkeley in 1950. Excited to join the UC Berkeley Radiation Laboratory during that golden era, under E.M. McMillan he earned his PhD in 1957 by completing one of the first Bevatron measurements. Accomplishments of experiments in which he was involved at Berkeley, Fermilab, and SLAC included the first observations of the top quark, of charmed particles produced by muons, and of direct charge-parity-symmetry violation.

In all of this work Kerth maintained a highly innovative, hands-on style. For example, he led development in the 1960s of one of the first automatic film scanners for particle physics, and in the 1990s devised an ingenious mechanism for splitting BaBar’s silicon vertex detector (now on display in the Building 50 lobby) so that it could be installed around the beam pipe. Throughout his career, with no sense of self-importance, Kerth worked tirelessly to ensure the success of many experiments, even fashioning scale models in his home workshop.

Starting even before the launch of the Apple I personal computer, Kerth developed a lifelong interest in computing. Initially he arduously programmed primitive devices to control apparatus in real time. Later, as already noted, this interest grew in many directions, ranging from computing administration to recordkeeping and demonstrations for teaching.

In the classroom as a much-respected lecturer, Kerth exuded a love for classical physics, especially for devising ever-more-elegant solutions to the challenging electrodynamics problems posed by his friend J.D. Jackson. Another facet of Kerth’s teaching was his concern for PhD students and other younger colleagues. He supported them faithfully, hosted them regularly at home with his wife Ruth, and delegated to them all the responsibility they could handle. Students working with Kerth’s group went on to leading positions on distinguished physics faculties across three continents.

For his tireless service Kerth was awarded the Berkeley Citation, a rarely bestowed honor, upon his retirement in 1993. Characteristically, of course, he continued to work at the lab and on campus for many years thereafter.

“I had the privilege to work closely with Roy on the Silicon Vertex Tracker for the BaBar experiment,” said Natalie Roe, director of Berkeley Lab’s Physics Division. “He set an admirable example in his devotion to the art of experimental particle physics, his creative approach to problem solving, and his complete lack of self-promotion, coupled with his strong support of younger physicists. He leaves an impressive legacy of scientific, technical and institutional contributions to Berkeley Lab and UC Berkeley, and he will be much missed by all of us.”