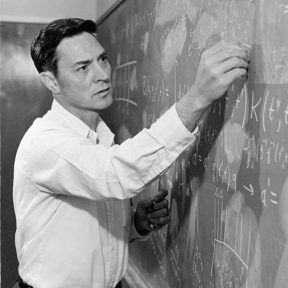 Geoffrey Chew, emeritus Professor of Physics at UC Berkeley and a theoretical physicist with longtime connections to Lawrence Berkeley National Laboratory’s (Berkeley Lab’s) Physics Division, passed away on April 11, 2019 at age 94. His originality left its mark on theoretical particle physics in ways that continue to the present.

After graduating from George Washington University, Chew joined Edward Teller’s group in the Manhattan Project at Los Alamos before beginning graduate school at the University of Chicago, where he was a student of Enrico Fermi. In 1948 he joined UC Berkeley as an assistant professor. Like a number of other UC Berkeley physicists, he refused to sign the university’s loyalty oath. He departed for the University of Illinois, where he remained until 1957 and his return to Berkeley.

Among Chew’s most important early works was the development with Francis Low of Chew-Low theory for meson nucleon scattering in 1956. A continuing feature of Chew’s work was the avoidance of perturbation theory, which he believed was inadequate for the task of understanding strong interactions. In place of perturbation theory, Chew relied on fundamental principles, like those that follow from the analytic properties of scattering amplitudes. To this he joined the philosophy of “nuclear democracy,” by which he meant that no elementary particle was more fundamental than any other – a consistent theory should explain them all. He recognized in the early work of Stanley Mandelstam a breakthrough that could advance his program, the Mandelstam representation, and brought Mandelstam to Berkeley.

Chew continued research in the strong interactions, insisting on a theory that at once described both the scattering of particles and their masses and angular momentum. This led to the remarkable formula invented by Gabriele Veneziano, which satisfied these conditions in an approximate but impressive way. The Veneziano Model was the origin of what was to become string theory, whose development was due significantly to Chew’s former students, David Gross and John Schwartz.

After the mid-1970s, Chew’s work diverged from the general line of research in particle physics. He followed his own inclinations, as he had always done. Much of this work was done in collaboration with Henry Stapp and Jerry Finkelstein, with unflagging enthusiasm for more than 40 years. Past his 94th birthday Chew could often be found in the corridors and physics offices of Berkeley Lab’s Building 50.

Chew was much admired not just for his contributions to theoretical physics, but as a wise and kind member and leader of the Berkeley theoretical physics community. A member of the National Academy of Sciences, Chew served as Chair of the Physics Department and Dean of Mathematical and Physical Sciences at UC Berkeley. His students included, in addition to Gross and Schwartz, Richard Brower (Boston University), Ling-Lie Chau (UC Davis), Bipin Desai (UC Irvine), Carleton DeTar (University of Utah), Ramanmurti Shankar (Yale University), John Stack (University of Illinois at Urbana-Champaign), and Chung-I Tan (Brown University).

The Department of Energy recognized Chew with Ernest Orlando Lawrence Award in 1969 “for his imaginative and creative contributions to progress in a wide range of problems in nuclear and elementary particle physics and for his inspiring leadership which has provided the driving incentive to senior scientists, as well as to young students working in this field.”