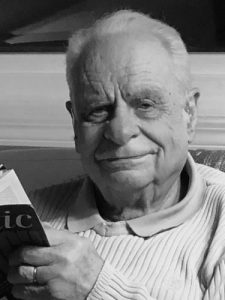 Philippe Henri Eberhard passed away suddenly and peacefully at home in El Cerrito on February 17th of this year. He was born in Lausanne, Switzerland on July 8, 1929, to Henri Eberhard and Marguerite Eberhard. In April 17th 1954, he married Jacqueline Eberhard in Lausanne.

For his entire career, he insisted on an involvement in only peaceful applications of nuclear power. His deep grasp of fundamentals allowed him to contribute to his chosen field at many levels. 1961, he accepted a permanent position on the elite research team led by Luis Alvarez, ultimate recipient of the Nobel Prize for Physics. In 1968, along with the rest of the research team, he accompanied Dr. Alvarez to Stockholm to attend the ceremony.

Philippe’s legacy of curiosity, kindness, love of family, passion for politics and scientific excellence as well as his appreciation of fine wines and cheeses will live on in the hearts of all who knew him.

He is survived by his wife, Jacqueline, his two children Gilles (wife Jill) Eberhard and Marc (wife Dawn) Eberhard, his grandchildren Jeanne, Dan, Colette, Alex and Claire, as well as his sister Michèle Monnier.