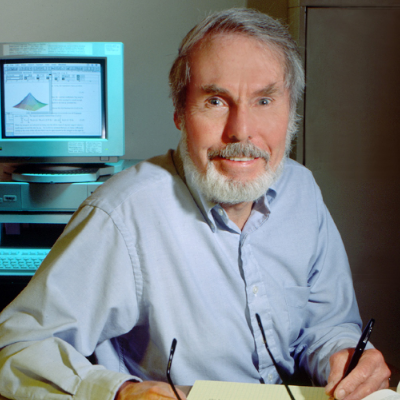 “A short philosophy of teaching might be love your subject and convey that love,” Jackson once said. “All else is secondary.”

John David Jackson (January 19, 1925 – May 20, 2016) was a Canadian-American theoretical physicist internationally known for his publications and teaching in high energy physics.  Born in London, Ontario, Canada, to Walter David and Lillian Margaret Jackson, he received a B.Sc. in Honors Physics and Mathematics at U of Western Ontario and Ph.D. in Physics at MIT under Victor Frederick Weisskopf.  In Boston he met Marilyn Barbara Cook, whom he married in 1949.  He taught at McGill University for seven years and at the University of Illinois for ten before coming to UC Berkeley and the Lawrence Berkeley National Laboratory in 1967.  He held appointments at Fermilab, CERN, and numerous physics summer schools.  Although he retired from teaching in 1993, he remained active as a Participating Retiree at LBNL and Professor Emeritus in the Berkeley Physics Dept.  Among his three books, Classical Electrodynamics is known worldwide as the seminal graduate text on the subject.  Jackson served as Editor of Annual Review of Nuclear and Particle Physics for 17 years and was active in the Superconducting Super Collider Project in the 1980s, serving as Deputy Director for Operations for 2 years.  He was a fellow of the American Physical Society and American Association for the Advancement of Science, and a member of the American Academy of Arts and Sciences and the National Academy of Sciences.  A staunch advocate for human rights and academic freedom, Jackson was actively involved in Scientists for Sakharov, Orlov and Sharansky (SOS), created in the mid-1970s.  He was a lifelong major donor to the ACLU, American Friends Service Committee (AFSC), and the Unitarian Universalist Service Committee (UUSC), and his lifelong interests included listening to jazz and hiking in mountains.  Jackson received a Distinguished Teaching Award at UC Berkeley in 1986 and is recognized today by the American Association of Physics Teachers (AAPT) through the JD Jackson Award for Excellence in Graduate Education and by McGill U Physics Dept through the JD Jackson Award for Excellence in Teaching.  Physicists John T. Donohue, Gordon L. Kane, Robert Cahn, Richard Field, and Chris Quigg are among his doctoral students.  “A short philosophy of teaching might be love your subject and convey that love,” Jackson once said. “All else is secondary.”

He is survived by his four children, Ian (Ann Arnold), Nan (Vern Mesler), Maureen, and Mark, and three grandchildren, Aldo, Nico, and Catalina.  His much loved wife of 65 years, Barbara, died in 2014.  Readers are invited to make memorial donations to the ACLU, AFSC, and UUSC as well as to UC Berkeley Physics Dept (Graduate Student Support Fund in Physics); U of Western Ontario Physics and Astronomy Dept (Lillian Margaret and Walter David Jackson Scholarship in Physics); Lansing Community College Foundation (Jackson Scholarship); or to your local jazz scene.