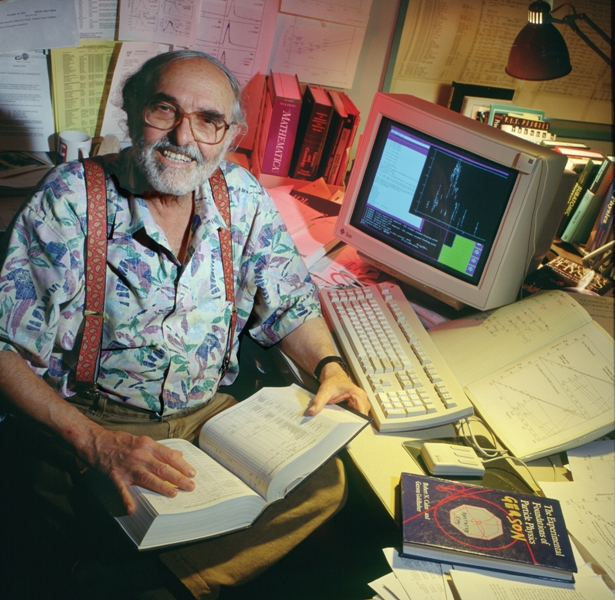 Gerson Goldhaber, an award-winning physicist with the Lawrence Berkeley National Laboratory (Berkeley Lab) and the University of California (UC) Berkeley, who played key roles in discoveries that spanned more than five decades, passed away July 19, 2010 of natural causes, at home surrounded by his family. He was 86. Goldhaber was renowned for his experimental contributions to such seminal breakthroughs as the antiproton and the J/psi subatomic particles, and the mysterious dark energy that accelerates the expansion of the universe. He was also an accomplished artist who illustrated two books of poems written by his wife, Judith, Sonnets from Aesop and Sarah Laughed: Sonnets from Genesis.

“Gerson Goldhaber had an unerring sense of where great discoveries were to be made, from the anti-proton, to the psi and charm particles, and finally to dark energy. To each of these he brought his great curiosity and enthusiasm, which were coupled to a special talent for turning abstractions into something for which he could have an intuitive sense,” said Robert Cahn, long-time colleague and co-author with Goldhaber of a book, The Experimental Foundations of Particle Physics.

Goldhaber was born in Chemnitz, Germany, Feb. 20, 1924, and moved with his family to Cairo, Egypt in 1933 to escape Nazi persecution. He earned his Master’s of Science degree in physics at Hebrew University, Jerusalem, in 1947 and his Ph.D in 1950 from the University of Wisconsin. He became a naturalized United States citizen in 1953 while working as an instructor at Columbia University. Later that same year, he joined the UC Berkeley Physics Department and the research staff at its Radiation Laboratory, which would later morph into Berkeley Lab, a U.S. Department of Energy national laboratory.
Goldhaber first rose to major scientific prominence with his contributions to the discovery of the antiproton. In collaboration with his first wife, nuclear chemist/physicist Sulamith Löw, Goldhaber led a group that used a photographic emulsion detector technique he developed to confirm the discovery of the antiproton at Berkeley Lab’s Bevatron accelerator by the research group of Emilio Segrè and Owen Chamberlain. Segrè and Chamberlain received the Nobel Prize in 1959 for this discovery.

In 1960, Goldhaber and physicist George Trilling formed the Trilling-Goldhaber experimental particle physics group, which included his wife Sulamith. In 1963, the group discovered the A meson, a subatomic particle Goldhaber named after his son, Amos Nathaniel.

“The wisest professional decision I ever made was to join Gerson in a collaboration whose success resulted almost entirely from his extraordinary insight into where to find new and important science,” said Trilling. “He was a great physicist and a wonderful human being.”

In 1965, shortly after arriving in India on a family trip around the world, Sulamith Goldhaber went into a coma and died. For solace, Goldhaber took up art, working in various media before gravitating to paintings and drawings. In 1969, he married Judith Margoshes Golwyn, playwright and poet, and for many years the lead science writer at Berkeley Lab. During their 41-year marriage, Gerson and Judith collaborated on many art projects and articles on scientific subjects, and raised two daughters, Michaela and Shaya.

In 1972, the Trilling-Goldhaber group began a collaboration with a group led by physicist Burton Richter at the Stanford Linear Accelerator Center (SLAC), on an experiment with SLAC’s Stanford Positron-Electron Asymmetric Ring. The collaborators built a machine that was initially called the SLAC-LBL Solenoidal Magnetic Detector and would later be known as the Mark I detector.

With Goldhaber leading the data analysis, the Stanford-Berkeley collaborators in November of 1974 announced the discovery of a new subatomic particle that turned out to be the first member of the “charm” flavor of quarks. Goldhaber proposed the particle be named “psi” for the Greek letter, because its particle tracks formed a pattern that resembled the psi symbol. The same particle was almost simultaneously discovered by a collaboration at Brookhaven National Laboratory, led by MIT physicist Samuel Ting. The Brookhaven group called their discovery the “J” particle. As leaders of the two collaborations, Richter and Ting won the 1976 Nobel Prize for the discovery of what is now known as the J/psi particle.

In 1989 Goldhaber shifted his considerable intellectual focus to astrophysics and became one of the first members of Berkeley Lab’s Deep Supernova Search. Founded by Carl Pennypacker, Richard Muller and Saul Perlmutter, this group would later be renamed the Supernova Cosmology Project (SCP). Following Perlmutter’s development in the early 1990s of a technique for finding “supernovae on demand,” the SCP group by 1997 had collected and analyzed 38 of the Type Ia supernovae “standard candles” in sufficient detail to take a stab at measuring the expansion rate of the universe.

Capitalizing on his years of analyzing particle physics data, Goldhaber was the first to report evidence in the SCP experimental data that instead of the decelerating expansion of the universe that he and everyone else expected, the expansion of the universe was accelerating. He presented his results to the Berkeley Lab members of the SCP on September 24, 1997, the earliest dated evidence for what, less than a year later, would be famously dubbed “dark energy.”