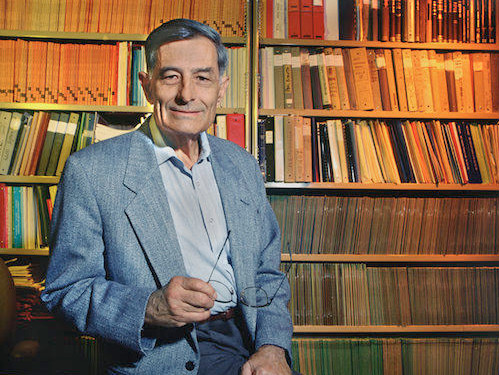 Our colleague George Trilling passed away on April 30 at the age of 89.  George’s career reflected and shaped the Physics Division’s program from his arrival in Berkeley in 1960 until well after his retirement in 1994.  He came from the University of Michigan with Don Glaser, whose invention of the bubble chamber provided a new way to view particle interactions.  The Trilling-Goldhaber group used bubble chambers developed at LBL to study K meson interactions at the Bevatron. Bubble chamber pictures from that era are still to be seen in the hallway of the fifth floor of 50-B.   In the early 1970s, the Trilling-Goldhaber group joined SLAC colleagues led by Burt Richter and Martin Perl to build the Mark-I detector for the SPEAR e+-e- collider.  The Mark-I collaboration went on to discover the J/psi resonance, charmed particles, the tau lepton and thus transformed particle physics.

Beginning in the 1980’s, the Trilling-Goldhaber group continued their collaboration with SLAC to construct the Mark II detector, which was first installed at SPEAR, and later moved to the higher energy PEP collider.  The Mark-II experiment measured the lifetime of the B meson, which turned out to be surprisingly long, a property that enabled future studies of CP violation at asymmetric B factories. Mark II was subsequently moved to the SLC to study the Z boson, but delays resulted in it being overshadowed by LEP.

George was instrumental in establishing the Superconducting Super Collider, SSC, as the highest priority HEP project in the 1980s. As the SSC project developed, George became spokesperson for one of the two large detector collaborations, the Solenoidal Detector Collaboration, SDC.  The SDC grew out the Fermilab experiment CDF, in which LBL had had a prominent role under his leadership of the Physics Division.  The SSC was terminated in 1993 and the next year Trilling formally retired. However, he continued to facilitate US involvement in the ATLAS experiment at LHC; ATLAS is now one of the largest activities in the Physics Division today.  Indeed, George continued as an active participant at the Lab until 2017, when his failing health finally prevented his coming in to his office in Building 50.

Throughout his career, George was asked to take on important leadership roles.  At the age of 38, he became Chair of the U. C. Berkeley Physics Department.  From 1984 to 1987 he was the Director of the Physics Division at LBL.  During his tenure as Physics Division Director, George guided a major evolution into the area of precision semiconductor detectors, still a dominant theme at the Lab today. Work on pixel detectors for the SSC, custom ASIC design, the Microsystems Lab, and the CDF silicon vertex detector, all began under his leadership.

A member of the National Academy of Sciences, in 2001 he served as President of the American Physical Society.  He chaired innumerable national panels, committees, and task forces.  But his leadership role was much more than this indicates.  George Trilling was the person you went to when you had a hard problem, whether it was a problem in physics or not.  You went to George for his wisdom, which was comprehensive and which he freely shared with characteristic modesty.  His influence on his peers and particularly on his younger colleagues was profound. We shall miss him greatly.

In Tribute to George Trilling